According to William James, 19th Century Unitarian and the first
American-born psychologist, Mystical Religious Experiences are basically optimistic. He also believed that, “The founders of every church owed their power originally to the fact of their direct personal communication with the divine”.  The contemporary theologian John Hick bases his Universalism in part on his own mystical experiences of God. The Alister Hardy Religious Experience Research Center at Oxford found that 94% of reported mystical experiences in their British national sample were positive. Given this, it is hardly surprising that the great Anglican mystic and researcher Evelyn Underhill lists so many prominent Universalists among the great mystics. Among them are: Clement of Alexandria (160-220), Origen (183-253), Macarius of Egypt (295-386), Gregory of Nyssa (335-394), John Scotus Erigena (810-877), Jacob Boehme (1575-1624), and Jane Lead(e) (1625-1704). The Carmelite Priest and mystical researcher Bruno Borchert adds these Universalists: Gregory of Nazianze (329-390) and Hans Denck (1500-1527).  In my view, no list of Universalist mystics would be complete without Dr. George De Benneville (1703-1793).

Ken R. Vincent notes many Religious Experience Researchers have come to conclusions that support Universalism. The full text of the article is at:

"Mystical Religious Experiences and Christian Universalism" by Ken R. Vincent, Ed.D. is excerpted from Chapter 7 of, THE GOLDEN THREAD: GOD'S PROMISE OF UNIVERSAL SALVATION. This chapter is an overview of research on mystical experience from the beginning of Christianity to the present, illustrating that such encounters with the Divine reveal a God of unconditional love.

The complete report can be found at: Mystical Religious Experiences and Christian Universalism

The following is an abstract of an article, "An 18th Century Near-Death Experience: The
Case of George de Benneville" <http://www.christianuniversalist.org/resources/articles/nde-debenneville/> by Ken R. Vincent, Ed.D. and John C. Morgan, D.Min.

ABSTRACT: Near-death experiences (NDEs) have been reported since ancient times. Before
the advent of modern reporting methods in medicine and the social sciences, the credibility of these accounts was often compromised through editing by church authorities or retelling by secondary sources. The autobiographical account of the NDE of George de Benneville, an18th-century physician and lay minister, would satisfy the criteria of contemporary near-death researchers. In addition, de Benneville's life is so well-documented that researchers have confidence in his personal credibility. The hopeful Universalist message in his account is also consistent with the reports of modern-day NDEs. We provide a complete account of de Benneville's NDE and compare it with both ancient and modern NDEs. We discuss his experiences within the context of comparative religion in general and Universalist Christian theology in particular.

This complete report can be found at: An 18th Century Near-Death Experience: The Case of George de Benneville

The following is an abstract of an article, “The Near-Death Experience and Christian Universalism” by Ken R. Vincent.  It was published in the fall 2003 Journal of Near-Death Studies (a peer-reviewed journal whose contributors are primarily physicians, social scientists, and theologians). This article is also the basis for Chapter 8 of Dr. Vincent 's new book: The GOLDEN THREAD, GOD'S PROMISE OF UNIVERSAL SALVATION.

ABSTRACT: I explore the near-death experience (NDE) in the context of the theology of Christian Universalism. I provide data on various models of Christian theology, and present the model of Restorative Universalism as the one most compatible with reports of afterlife in the NDE. I interface quotations from actual NDE accounts with New Testament verses to illustrate these similarities. Restorative Universalism includes a judgment ("life review" in NDE terminology), followed by punishment for some but eventual universal salvation for all. I present an analysis of New Testament verses supporting the theologies of "Jesus Saves," Predestination, Good Works, and Universal Salvation, which reveals Salvation by Good Works to be supported by the greatest number of verses, followed by verses advocating Universal Salvation for All. Christian Restorative Universalism is based upon these two predominant New Testament teachings and affords the greatest harmony with the NDE.

The full article can be found here.

This complete report can be found at: NDE and Christian Universalism <http://www.near-death.com/experiences/origen021.html>

Kevin Williams who is webmaster of the #1 website on near-death experiences and author of Nothing Better Than Death has a similar view.  An excerpt of his book can be found at: NDEs (separate webpage) and the Bible affirm Universal Salvation

While there are some Universalists like Hosea Ballou who believe that there is no hell, the vast

majority of Universalists believe that Hell is for purification / rehabilitation and not permanent.

"The Scientific Investigation of the Dark Side" by Ken R. Vincent explores humanity's

experience of Evil. The article can be found at the Dark Side (separate webpage) 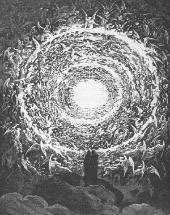