I am the place where God shines through,

For He and I are one, not two, He wants me where, and as I am, I need not fret, nor fear, nor plan. If I will be relaxed and free He'll carry out His work through me.

Teach me, Father, how to go Softly as the grasses grow; Hush my soul to meet the shock Of the wild world as a rock;

Teach me, Father, how to be Kind and patient as a tree. Joyfully the crickets croon under the shady oak at noon; Beetle, on his mission bent, Tarries in that cooling tent. Let me, also, cheer a spot, Hidden field or garden grot -Place where passing souls can rest On the way and be their best.

Often in American history, an individual is able to influence across a wide spectrum of possible audiences. Such a person was Charles Edwin Markham. Today many people can quote his poems and yet they may know nothing of who he was, when he lived, or what influenced him.

In fact ask yourself if in today's world a teacher who was also a poet could make social commentary critical of the negatives of the often capitalist American experience, and then be asked to write on behalf of a Republican president?

Interestingly enough, Markham's poems are often used as inspiration in sermons, twelve step meetings, prayer groups, and self help groups, theosophical societies, and by motivational speakers. You will find him quoted by Evangelical Preachers, his writings are used in service readings found in hymnals and published by the likes of the Theosophical Society, and many Librarians in Christian Science rooms can quote a poem by him, not knowing he was the author.

Often his poems are used as prayers, and if you do an online search you will find many of his works as prayers. Edwin Markham poems are often attributed to "unknown" or anonymous" on many websites as a matter of habit. In a simple search I found his writings again and again as prayers.

Markham's poems have been made into gift cards and prayer cards, very similar in the manner that the prayer of Jabez and serenity prayer is published.

Charles Edwin Markham was born into a family of ranchers in Oregon City in the 1850s. His parents would eventually divorce and he would almost never see his father. He himself would learn the ways of manual labor and eventually escape to the world of teaching. He would remain a teacher by trade and was often considered a popular and prominent individual in the communities in which he taught.

He would struggle through two marriages eventually to be married a third time to Anna Catherine Murphy, with whom he had a son. Anna became Markham's "collaborator and editor" until her death in 1938.

Markham was very influenced by Thomas Lake Harris, who was described as a poet, socialist, and charlatan. His influence can especially be seen in Markham's first pieces of poetry. This mystical ideology would be a strong influence on the poem that would make Markham famous, "The Man with the Hoe," which would before his death be printed into dozens of languages.

Markham is also the author of Lincoln, the Man of the People, which he was asked to write commemorating the Presidents birthday and which he would later be often asked to read, including at the dedication of the Lincoln memorial.

While it is true that Markham was influenced by the mystic movements of the 19th century he was a lifelong Universalist, a label he wore throughout his life and even in death.

He attended a Christian College in California, and spoke at St Lawrence Theology University(Universalist) on occasions. It is important to keep in mind that this is prior to the merger of the Unitarian and Universalist churches.

It is also important to note that Markham brought together art and social commentary.

Markham's influence is broad but somewhat forgotten; his words however still live on. Today it is often considered to be a negative to be an individual who is spiritual, political, and artistic at the same time. Charles Edwin Markham was such a man, and it his writings inspire and edify soldiers, the down trodden, the believer, and even the preacher.

Neil Carrick is a Minister, and Entrepreneur residing in Murrels Inlet, South Carolina.

Back to main
Biography page. 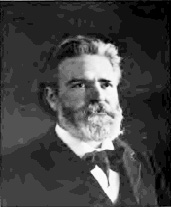