Carolyn Owen Towle, a retired minister from San Diego, speaking about our own religious ancestors, said it well a few years ago. She wrote: “It is only when we truly pay homage to (our) spiritual mothers and fathers who literally founded the faith we enjoy that we are to keep from foundering as a religious community. Trees without sound root systems topple.”

Clara Barton was born in 1821 in North Oxford, Massachusetts. She died at 91 in Glen Echo, Maryland where her house is a National Historic Site.. It’s a big thrill to drive down the Washington Beltway and turn off at the Clara Barton Parkway. Here in Massachusetts her birthplace is preserved as a small museum in North Oxford, adjacent to her REAL memorial, the Clara Barton Camp for Girls with Diabetes, founded by Universalist women over 70 years ago.

This camp and the institution surrounding it - the Barton Center for Diabetes Education - is a leader in this health field. Each summer the Camp is filled with young girls empowered to take control of their lives in spite of their disease.

Clara Barton grew up in the North Oxford area. She taught school there as a young woman and later went to Washington, DC where she worked as an inscriber of laws in the House of Representatives. She always insisted on receiving the same pay as the male inscribers. At the beginning of the Civil War there was a skirmish in Baltimore, and she heard that a regiment from this area was involved and went there to see if any of her former students had been hurt. She became an active worker in the war after that, not as a nurse, but as an administrator, procuring supplies for she knew that if there was a battle, supplies of medicine, bandages, and beds had tobe close at hand.

After the war Abraham Lincoln hired her to find men listed as missing and return them to their families if possible. She published lists of the missing men and circulated them all the way to the Pacific, made cemetery records, used newspapers, and even sent occasional terse letters to men telling them to contact their worried mothers. She accomplished more almost singlehandedly than huge bureaucracies have done in our recent wars.

In need of rest she later went to Europe, met with people involved with the International Red Cross and determined that a branch needed to be started here and it was organized with herselfas president.

The Park Rangers in her home at Glen Echo told me that there were two brothers who had made a fortune manufacturing a spatterless egg beater. They bought land along the Potomac River, thinking that if some famous person moved there, they could sell house lots and create a chautaqua. Clara Barton - already perhaps the most famous woman in America - agreed to move there if they would build her a house, which they did.

She has many biographers and there are many stories about her later life in that house. She wasa woman of courage and determination. In 1892 at age 71 she took relief supplies to alleviate the Russian famine. At 75 she brought relief to the victims of the Armenian massacre in Turkey; and at 77 she took supplies to Cuba during the Spanish American War.. At 79 she went to the Galveston flood. By this time, tired and sick, she returned to Glen Echo where she died in 1921. She was born on Christmas and died on Easter - a fact well noted at the time.

Finally, I want to share with you part of a letter which Clara Barton wrote in 1905, actually on March 12, one hundred years ago. The letter was written to Mrs. Norman S Thrasher from Lakewood, Ohio. This letter hung for many years in the Clara Barton Birthplace Museum. Since the sale of the Camp property to the Barton Center, the letter is in the hands of the UU Women’s Federation.

She wrote: “Your belief that I am a Universalist is as correct as your greater belief in being one yourself, a belief in which we who are privileged to possess it, rejoice. In any case, it was a great gift, for like St. Paul, I “was born free and saved the pain of reaching it through years of struggle and doubt.”

She goes on to recall that her father was a leader in building the church in which Hosea Ballou preached his first dedication sermon. She closed by saying that she has taken part on the recontructions and remodeling (of the church) in the past and looks - and I quote - “anxiously for a time in the near future when the busy world will let me once again become a living part of its people.”

Another way that Clara Barton’s name and work live today is in the form of a endowed internship for women’s health issues in the UUA’s Washington Office for Advocacy and Witness. The UU Women’s Federation took $200,000 from the sale of the Clara Barton Camp to the Barton Center, raised another $200,000 to complete the permanent endowment. The first Clara Barton intern - Kierstin Homblette has finished her second year of service and moved into her future. The second Clara Barton intern, Meredith Shonfield-Hicks, began this fall working on youth and young adult issues, as well as monitoring the Violence Against Women Act.

Phyllis Rickter is Past President of the Unitarian Universalist Women's Federation. 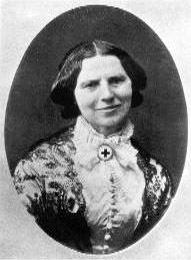